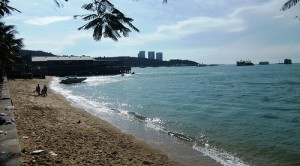 Pattaya is a city located on the east coast of Thailand, about 165 km from Bangkok. The city is popular for the beaches and the Pratamnak Hill, often called “Buddha Hill” because of the temples on top of it. And of course, the gogo bars and the sex industry still play an important role in the city’s economy.

How to get to Pattaya

>>read more about Getting from Bangkok to Pattaya

The city has a tropical wet and dry climate. The warm and dry season lasts from November to February , while the hot and humid season is from March to May. The hot and rainy weather lasts from June to October. The average high temperature doesn’t go below 30C while the average low is between 22C and 27C. The wettest months are September and October.

>>read more about Weather in Thailand

What to do in Pattaya

The most important activities in Pattaya are on the beach or related to the beach and water. The bay is divided into two main beachfronts. Pattaya Beach is parallel to the city center, while Jomtien Beach is in the southern part of the bay. This is where the more expensive accommodation and restaurants can be found. Several islands are located offshore and can be accessed by speedboat.

The city is an excellent family seaside destination. There is a zoo and the kids can also spend the time at the various theme parks. The botanical garden includes an orchid nursery. Adults can enjoy a game of golf. An aquarium, water parks, a crocodile farm and plenty other attractions won’t let you get bored while visiting this part of Thailand.

The city is still famous for its nightlife which has , at least something, to do with the sex industry and the gay scene. But no matter how hard the authorities try to make Pattaya a family oriented destination, the sex industry still brings a lot of money and the city remains famous for the go go bars. And let’s not forget the katoey cabaret (ladyboy) for which the city is also famous.