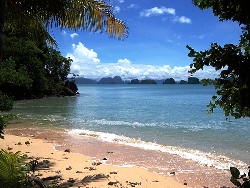 Thailand’s islands are often postcard perfect: palm trees, clear blue water, white sand. Some are covered in jungle and mountains, while others are a veritable city. Others still are national parks and have nothing but a few bungalows run by the government.

The best time to visit Thailand’s islands is between December and March. It rains heavily during May and October  on the west coast, while the east coast has less rain but the wet season lasts longer: from June to December.

Here’s a short guide to  well-known island destinations in Thailand.

Phuket is Thailand’s largest island and the most popular beach destination. Given its popularity, Phuket can be an expensive place: from accommodation to food and recreational activities, you will pay more than anywhere else in Thailand. However, you’ll also have more services at your disposal: feeling hot? Go to the mall and take in a blockbuster movie at an air-conditioned theater. Tired of lying around? Go jet-skiing, paragliding, or banana-boating.

There are a few secluded beaches where you can camp alone, away from the hustle and bustle of the crowded beaches with hotels, restaurants and everything else on them.

Samui (alternative spelling:  Koh Samui) is in the Gulf of Thailand on the country’s east coast. There’s an international airport on the island and countless ferry connections to the mainland and other islands. It’s a possible spa and resort destination, and you can splurge as much as you like here.

The most popular beaches on the island include:

Samet (alternative spelling:  Koh Samet) is a small island located close to Bangkok, and popular with weekenders escaping the city.  It’s a relatively rural island, with unpaved roads, but  during the weekends the beaches are crammed with Thais and international tourists alike.

The most popular beaches on Samet are:

Part of namesake Mu Ko Chang National Marine Park, Ko Chang is Thailand’s second-largest island. It’s very close to the Cambodian border, on the Upper Southern Gulf, and is easily reached by a five-hour bus ride and a one-hour ferry. Though development hasn’t escaped it, the island’s interior is covered with mountains and impenetrable jungle.

The west coast is the most developed and offers the most accommodation. On the east coast you’ll find fishing villages, mangrove forests, and a couple of nice beaches.

The most popular beaches on the island include:

Other popular island and beach destinations in Thailand include: