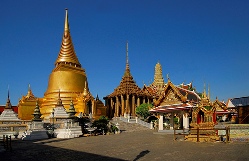 Steamy and thick, Bangkok is ripe with the smells of incense, cement, curry, and motorbike exhaust. A true Asian metropolis, Thailand’s capital is zigzagged with canals churned up by river taxis and marked by the cool hush of the air-conditioned Skytrain and Metro. A new airport, complete with a train link to the inner city, eases your arrival to the Southeast Asian hub.

Though Bangkok has made a firm step into the modern world with its efficient public transport system and shiny new airport, it’s easy to let yourself get lost in the urban jungle of green trees, temples, and sizzling food stalls.

Bangkok is a major stopover point for folks venturing elsewhere in Asia, and as such it’s not difficult to find cheap flights to the country. All forms of accommodation abound, from hostels to five-star hotels, so you can cater your trip to your personal budget. Furthermore, Bangkok is an amazing city for shopping, with every sort of market and mall selling every sort of electronic or knock-off designer wallet.

Bangkok has been Thailand’s capital since 1782, when rule was transferred from Ayutthaya. Not surprisingly, then, historical palaces and temples dot the cityscape and offer quiet refuge from the ongoing deluge of noise and smells. Following is a list of Bangkok’s main places of interest (both the naughty and the nice), but see our Attractions in Bangkok page for more information on Bangkok’s sites.

Numerous day trips are also available from Bangkok, so if you’ve only a short stopover, consider destinations such as the Damnoen Saduak Floating Market or the Bridge on the River Kwai.

How to get to Bangkok

There are two airports in Bangkok. Suvarnabhumi Airport (nicknamed “Swambi”) is the main airport in the capital, where all international flights come through. It also handles domestic flights, as does the smaller Don Muang airport in the north of the city.To get from Swambi to the city center, you can catch a metered taxi (follow the “public taxi” sign, queue up and tell your destination at the desk), Airport Express buses (each route takes between 60 and 90 minutes to cover) or the new Skytrain airport link.

An excellent bus system links Bangkok to pretty much anywhere else in Thailand.

The major train station in Bangkok is Hualamphong, which provides rail links as far north as Chiang Mai, as far east as Pattaya, and as far south as Singapore.

Bangkok has a tropical monsoon climate. The coldest month is January and the hottest is April, but temperatures don’t vary so much during the year. Hailstorms are virtually non-existent in the city. The relative humidity is rather high.

There is plenty to keep you occupied in Bangkok; read a detailed post here. The city’s most visited landmarks are: the Grand Palace, Wat Pho, and Wat Arun.

The Grand Palace served as a residence of the King of Thailand from the 18th century to mid-20th century. The complex is located on the east bank of the Chao Phraya River.

The most important buildings in the complex are:

Wat Pho is also known as The Temple of the Reclining Buddha. It’s located in Phra Nakhon district right near the Grand Palace. The temple is recognized as the birthplace of the Thai massage. It is one of the largest and oldest wat (monastery temple) in Bangkok. The temple is home to over 1000 images of Buddha

Wat Arun is a temple located in the Bangkok Yai district, on the west bank of the Chao Phraya River.

Bangkok is also popular for its street markets. The Chatuchak weekend market is one of the biggest in the world.

If you are hungry, you can find street food carts pretty much everywhere. There are also many restaurants in Bangkok which serve anything from noodle soups to curry.