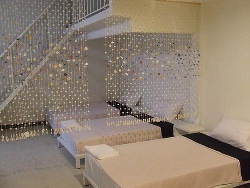 Since it’s one of the world’s top backpacker destinations, you’d think Thailand would be overflowing with hostels. The bad news is that hostels aren’t super common, with most found in the major cities, but the good news is that accommodation is super cheap anyway. You’ll pay far less for a private room in Thailand than you would for a packed dorm room in Europe. That being said, the hostels you do find in Thailand are unbelievably cheap.

Not all hostels have the same facilities. Some might be flea-infested caverns, while others offer boutique experiences. Check out the room before committing.

Places billing themselves as hostels won’t always have dorm rooms; rather you can expect rooms with three or four beds sharing a bathroom.

The cheapest beds can always be found in dorms, but private rooms in hostels are often a great deal as well.

Book in advance. That won’t save you money – generally the prices don’t change from season to season – but it will save you a lot of headaches. Rooms book up quickly as the high season approaches and well rated hostels book up first.

HQ Hostel is done in minimalist white. Its sleek decor is relaxing and modern, and belies its modest price tag. HQ is within walking distance to the Skytrain (BTS), and close to great shopping. Its prices aren’t rock-bottom, however: 380B for a bed in a 10-room dorm, or 1700B for a private double room with its own bath. The price includes 30 minutes of complimentary Internet as well as breakfast. Its central location and awesome vibe are worth the extra few dollars.
»More cheap hostels in Bangkok and hostels on Khao San Road

Seven Suns is one of the best rated hostels in the city. There are only double rooms available. AC, breakfast, linen and airport pickup are included in the room price. There is a bar and restaurant in the hostel as well. Prices start at US$12/person/night in any of the rooms (twin private ensuite or double bed private ensuite).

Spicythai Backpackers is another well rated hostel which also offers beds in dorms. Breakfast, linen, parking, AC and security lockers are included in the price. A bed in one of the dorms costs US$8/night, while for a double room private ensuite you’ll pay US$12/person/night.

Phuket Backpacker is located right in the center of the town and offers both dorms and private rooms. AC, security lockers, breakfast, linen and airport pickup are included in the price. Prices for a bed in one of the dorms start at US$7/night, while for a double room private ensuite you’ll pay US$10/person/night.