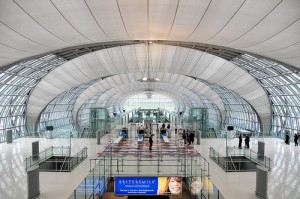 As a Southeast Asian hub as well as a widely-traveled country, airports are easy to access in almost all major Thai cities. Budget carriers make frequent connections, especially from Bangkok, and if you’ve only got a short time to visit Thailand, flying is a good way to get places quickly. Following are some of Thailand’s major airports:

Bangkok’s Suvarnabhumi (BKK) is the country’s main international airport, and likely the one you’ll fly into if you arrive by air.

Chiang Mai International Airport (CNX)is another major one, and it’s possible to connect from there to Taipei and Yangon as well as other Thai cities.

Phuket International Airport (HKT) is Thailand’s major southern airport for tourists (though it’s really only mid-south). Besides links to Thai cities, especially in the south, the Phuket airport hosts flights to and from Singapore, Kuala Lumpur, Seoul, Hong Kong, and even Moscow and Perth.

Though it’s unlikely you’d fly internationally to any other airports, many smaller facilities are also great for those on a tight schedule but not a super-tight budget. More popular ones include: