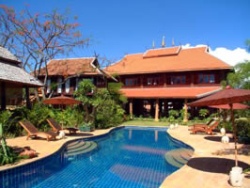 It’s not difficult to find a hotel in Thailand, but sometimes it’s difficult to find a good hotel in Thailand. Though it’s definitely worth it to book ahead for your first couple of nights in a city, if you’re traveling on a budget and staying in less than four- or five-star hotels, then you’ll do well to check your rooms out before booking. High-class resorts are generally trustworthy and don’t need a looking-over first, so we recommend booking ahead on those.

Need to know
Generally,  prices depend on the season. Many websites list high-season and low-season rates, including the dates that divide them.  The shoulder season runs roughly through the months of October and March/April, while November through February  marks peak season at the beach resorts. During the off season you can find luxurious rooms at at least half the cost, if not less.

Often the prices on hotels’ websites will be higher than if you use a search engine (see above) to find a room; it’s worth it to shop around to see if you can get a better price on the same room.

Beach resorts can book up far in advance, particularly in hot spots such as Phuket and Ko Samui; plan ahead by about three months.

Viengtai Hotel is a three-star hotel located one block from Khao San Road and within walking distance of many of Bangkok’s historical sites. Prices start at US$75/night for a standard double room, though numerous discounts (up to 30%) are available. Breakfast is included in the price.

Adelphi Suites Hotel is sleek and modern, with floor-to-ceiling windows looking out to the city. Each suite in this four-star hotel has TV,  AC, mini bar, and high speed internet. Prices start at US$100/night for a studio with a king bed. Breakfast is included in the price.

It’s fairly easy to stick to a budget in Chiang Mai, even with all its great shopping. There are plenty of cheap digs in a central location, which affords you the leisure of shopping around first.

Silver Resortel is a 3 star hotel situated on Phuket’s most popular beach: Patong. All rooms have AC and breakfast is included in the  price. A superior double room will run you around $85 per night during the high season.

Kata Beach Resort & Spa is a luxurious resort looking out to Kata Bay and Crab island. Popular with return visitors, the complex is also set up for corporate meetings. During the high season expect to pay US$286/night for a standard double room – though searching might yield you a better price. The hotel has a pool and a private beach.

Ravindra Beach Resort & Spa is a four-star hotel located on Jomtien Beach, which is a one of the “mellower” beaches in Pattaya. Though it’s right on the beach, it also has a large swimming pool. Breakfast is included in the  price. Prices start at around US$150/night for a superior double room during the high season.

»More about Accommodation in Thailand