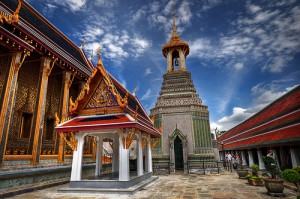 The capital city since 1782, Bangkok has an array of historical and modern attractions. We’ve chosen a few of our favorites out of the lot:

The humdinger of all Bangkok sites, the Grand Palace was once the residence of the royal family and is still used today for ceremonial occasions. Sprawling languidly over 94.5 hectares, the grounds house more than 100 buildings. Included are throne halls, a residence hall, and the Temple of the Emerald Buddha (known as Wat Phra Kaew and a site unto itself).

The various sites have different opening hours and admission fees. Wat Phra Kaew, for example, is open daily from 8:30am to 3:30pm, unless there’s a special ceremony going on. It’ll cost foreigners 350 baht, but the ticket includes admittance to Vimanmek Royal Mansion, Anantasamahkhom Throne Hall, and Sanam Chandra Palace (in Nakhon Pathom Province).

This former palace of the second king was built at the same time as the Grand Palace. It became a museum during Rama V’s reign in 1874, and is now considered one of the biggest museums in the world. Wings and exhibits include the Thai History Gallery, the Archeological and Art History Collection, and the Decorative Arts and Ethnological Collection. In these you’ll find handicrafts, prehistoric objects, King Taskin’s throne, and, in the Buddhaisawan Chapel, one of the country’s most revered Buddha images.

The museum is open Wednesday through Sunday from 9am-4pm; the entrance fee is 50 baht. Guided tours are held every Wednesday and Thursday at 9:30am.

Bangkok’s biggest park is a pleasant urban oasis, especially at sunrise and sunset. During these quieter hours you’ll find Thais practicing Tai Chi or following along to jazzy aerobics.

The park was originally handed over by King Rama VI, who gifted the land to Bangkok residents. It’s open daily from 5am to 7pm; admission is free.

Quite possibly the biggest market in the world, Chatuchak has pretty much everything – and we mean everything – for sale. Located at the Mo Chit Skytrain station, Chatuchak requires most of a day navigate. Don’t forget to drink plenty of water and make sure you eat – the environment is at times overstimulating and hot. The earlier you go, the fewer people and the lower the temperatures.

Chatuchak is open on Saturday and Sunday from 9am to 6pm; admission is free.