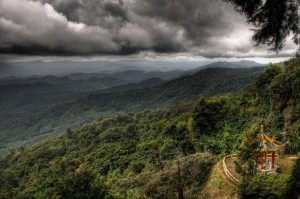 November through February is the best time to visit Thailand, which is perfect if you’re looking for a tropical escape from a North American or European winter. During these months you’ll find little rain as well as moderate temperatures. In general, Thailand’s weather is tropical and humid. Because the country is long and skinny, with northern highlands and southern coasts, you can except fairly significant regional variations in weather patterns and temperatures throughout the year. Here’s a breakdown:

In Thailand’s northern provinces it can get somewhat chilly during the peak season, but nothing a long-sleeved shirt won’t remedy. Up in the higher altitudes, however, it can be downright cold, especially at night, so when you’re packing take that into consideration if you plan to travel to any northern highlands. The rainy season up here runs through June and July, though you won’t see too much of it in the far north.

In southern Thailand, there are only two seasons: wet and dry. The temperature remains fairly constant thanks to the  equator’s proximity. As for the monsoon, on the west coast you’ll find rain from April to October, while the  season runs from September through December on the eastern Gulf coast. You can expect the peninsula to be warm and humid year-round, with temperatures peaking in April.

Weather during the year in Thailand:

Surprisingly, travel during the monsoon seasons isn’t unbearable. The air is clean and fragrant with plants, and often the rains only come in showers or for an hour-long burst in the afternoon. It will be a bit cloudier, which some folks aren’t fans of (especially if you’re in Thailand for a beach holiday), but you’ll save on accommodation.  It’s best to avoid Thailand in April, which is the hottest month throughout the country.