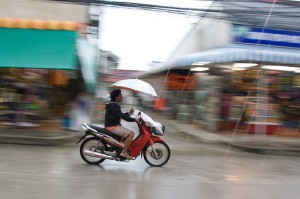 In May, Thailand is coming off of its hottest month, April. But just because April is hot doesn’t mean May is cool. Instead, May is probably the second-hottest month in Thailand, as well as one of the wettest. You’ll get a lot of train in the northern provinces (Chiang Mai averages over 15 centimeters in May) as well as along the west coat.

The good news? May officially marks the beginning of low-season for Thailand, which means that everything is incredibly cheap. While the cost for public transportation will remain the same, flights and accommodation will be significantly lower than in the high season, sometimes by more than 50%!

Probably the best places to visit in Thailand in May are along the Gulf of Thailand’s coast. Ko Samui and Ko Chang receive much less rain than their island counterparts on the Andaman coast, and their average temperatures fluctuate very little throughout the year.

If you’re heading to Thailand in May, try to check out the following festivals:

This fun ceremony is commonly held in northern Thailand, and celebrates the return of the rain as well as the beginning of the rice growing season. Rockets are launched from bamboo pipes, with varying types of competition. Anthropologists believe that this festival was once a fertility celebration, and true to form, bawdy jokes abound.

Visakha Bucha
Also called Vesak Day, this festival is the holiest of Buddhist holidays, and is practiced throughout Southeast Asia. It falls on the full moon of the 6th lunar month, so the date changes every year. Visakha Bucha celebrates the birth, enlightenment, and passing away of the Buddha, and worshippers gather to pray and make offerings.