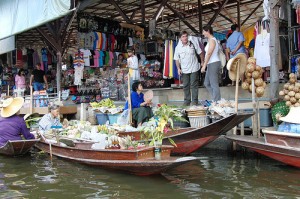 As the cultural and religious capital of Thailand, it’s not surprising that many great sites are just outside Bangkok’s city limits. Once you’re ready for a break from the big city, consider these options:

Taking advantage of Bangkok’s canals (or “khlongs” in Thai), floating markets were a center of commerce where vendors filled flat-bottomed boats with wares and paddled to a water-based market. Today, small authentic floating markets still exist in Bangkok and throughout Thailand, but the most well-known are the most touristy.

About 100 kilometers south of Bangkok is the most  popular floating market in or near the city. Though its official name is “Damnoen Sakuak,” and although it’s one of dozens of floating markets in Thailand, it’s more commonly called “THE” floating market. It caters almost entirely to tourists, with costumed Thais and boats filled with souvenirs, but it’s still a photogenic and worthy visit.

It’s easiest to visit the floating market on a tour, as public transport there is tricky. The best time to visit is early in the morning, so try to book a tour or transport that leaves early — that will help you avoid crowds and heat.

Bridge on the River Kwai

Part of the famous “Death Railway,” this bridge was constructed during WWII by the Japanese, who needed a land-based link between Burma and Thailand. Allied prisoners performed the actual labor on the bridge, with such terrible conditions that the line received the nickname “Death Railway.”  Today, the bridge on the River Kwai can be visited by train as part of a day trip or a longer overnight excursion from Bangkok.

For detailed information on visiting the site (you should really travel there by train!), read our full post here.

Ayuthaya was the capital of  Siam for over 400 years, and today is a city of renovated ruins encased in a confluence of three rivers. Headless Buddhas, spires that resemble Angkor Wat’s, and other crumbling grassy ruins are spread both on and off the island. Thanks to its Unesco World Heritage status, a glimpse of Ayuthaya’s glorious past is still available. Wats and palaces, many with obvious European influences, are open from 8am to 4pm, and a pass that gives you access to most of the sites on the island can be purchased for 200baht. Remember to dress respectfully.

You have a few options for getting to Ayuthaya. Many tour companies operate one-day trips from Bangkok, with transport up the Chao Phraya river. This is by far the most scenic way to visit, and the most unique. Many tours include lunch and air-conditioned vehicles; for extra perks, such as a guide or a private tour, make inquiries at the tour company. For independent transport, frequent buses depart Bangkok’s northern (Mo Chit) bus station, while several trains depart Hualamphong station each day.

Situated at the northern edge of Bangkok in the Chao Phraya river, Ko Kret is a small, car-free, man-made island that was created by dredging a bend in the river. Temples from the Ayuthaya period dot the island, and it’s also the oldest settlement of the Mon people, who dominated central Thailand from the 6th to 10th centuries. Excellent potters, the Mon residents continue to produce hand-thrown earthenware that is made from Ko Kret clay.

The best way to see the island is by bike, and even better if you visit on a weekday. Weekends get quite crowded with picnicking Thais, but on weekdays the island is often empty. Tour companies in Bangkok arrange cycle tours that include a pick-up and drop-off from your hotel.