Getting from Bangkok to Pattaya 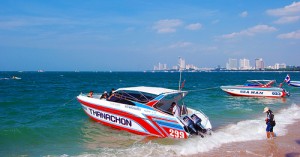 Because of Pattaya’s close proximity to Bangkok, it’s a popular destination for folks who want to hit the beach but don’t have the time to head to destinations further away. And, it must be noted, Pattaya is the sex tourist capital of Thailand (if not the world), so many people head down just for a few days of getting drunk and getting laid. That might sound harsh, but it’s the truth.

Pattaya is only 147km south east of Bangkok, and road options abound.

Bangkok to Pattaya by Bus

Pattaya is only a couple of hours away from Bangkok by bus, which leave frequently from Bangkok’s Ekamai (eastern) station. Note that many bus companies have ticket booths at the station; when you’re choosing your bus, make sure you’re not catching one of the slower local ones that pull over at every possible stop. However, if you’re headed to Hat Jomtien (the less sleazy of Pattaya’s beaches), you’ll either have to take one of the slower buses there, or catch a taxi from Pattaya’s North station (where the 1st class buses terminate).

You can also catch a bus directly from Bangkok’s Suvarnabhumi airport. You’ll find the ticket counters downstairs where you catch taxis to the city. Ignore the touts and book at an official ticket counter.

Bangkok to Pattaya by taxi and minibus

Pattaya is close enough that it’s possible to hire a taxi or car to drive you there. It should cost around $40USD from Suvarnabhumi airport, which is cheap when compared to US taxi rates! Again, ignore the touts and go for a metered taxi; you will need to pay expressway tolls on top of the fare, but that will only cost around $2. If you go by taxi, you’ll get delivered directly to your hotel’s door, and don’t have to worry about making stops along the way.

Minibuses also depart regularly from Bangkok’s Victory Monument. These leave when full, so you might show up and leave right away, or, possibly have to wait for an hour for other passengers to show up. Another alternative is to book a minivan directly from the Khao San Road area; this will cost you more (around 400baht, or $13USD, compared to 100 or 200 baht on the bus), but is very convenient and generally safer than the overnight buses that leave from Khao San Road.

Bangkok to Pattaya by Train

There is a third-class train that makes one trip per day from Bangkok to Pattaya. It leaves from Hualumphong station at 6:50a.m. on weekdays and is considerably slower and less comfortable than the bus, but also only 30 baht! That’s $1USD. Also, it’s a not a bad distance to ride on a 3rd class train – it’s an experience that most travelers never have.

There is no air connection between Bangkok and Pattaya, but the U-Tapao airport, on a military base, receives domestic flights from southern Thailand.