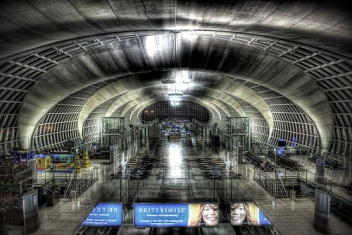 Bangkok is not only home to Thailand’s busiest international airport, but it’s also a Southeast Asian travel hub. That means that cheap flights to Thailand are generally plentiful and easy to come by, whether you’re flying from New York City or Chiang Mai. Even if you plan to spend your holiday in Phuket or places relatively far from Bangkok, it’s still likely to be cheaper to fly into the capital and transfer to a domestic flight rather than fly straight to your destination on an international flight.

Prices go up during the high season, which is roughly late-October through March. Expect a spike during the holidays, particularly around Christmas and New Year’s. If you plan to travel in December, you’ll save yourself a lot of money by booking your ticket at least three months in advance.

Though prices vary and change, you can expect to pay anywhere from $800-1200 during the high season from the US West Coast to Bangkok. Obviously, flexibility with your dates is going to help you find a beter fare. During December, that number can easily go upwards of $1500, and if you’re looking for a ticket within two months of your travel date, you’re likely to spend over $2000. Shoulder season tickets might go as low as $700, and if you find anything cheaper than that, you’re in luck – don’t hesitate!

Major carriers from the US include Thai Airways, Korean Air, Asiana, Cathay Pacific, American, Delta, Continental, and KLM. However, the easiest way to shop for flights is to use a program that searches many airlines for the best price (see below).

Getting from the airport to the city

To get from the airport to the city, a good option is the metered taxi. At the 2nd floor there are “public taxi” signs. Follow them until you get to the desk. Queue up and once at the desk state your destination. You’ll receive a slip with your destination written in Thai. A trip to the city takes about 40-60 minutes and costs 300-400 baht plus 25-baht expressway toll (in total under US$15).

The Airport express buses can be found outside the 1st floor exit. They cover several routes and the journey takes between 60 and 90 minutes. The fare is 150 baht (about US$5).

International flights go through Bangkok’s relatively new Suvarnabhumi Airport, while domestic flights travel to and from the older Don Muang airport. If you have to travel between the two, give yourself at least an hour and a half, as they’re on opposite sides of the city.