What to Eat in Thailand: Famous Thai Food

Thai food is one of the most popular international cuisines, beloved by countries around the world. Known for their spicy curries, fragrant soups, and a balance of salty-sweet-sour, Thai dishes can easily be addictive. Street food is quite popular in Thailand and most families eat together communally, if you get an invite to dine with a local family, by all means take it! You’ll taste a variety of dishes with influences from all over Southeast Asia. Here are a sampling of famous Thai food that you must try. 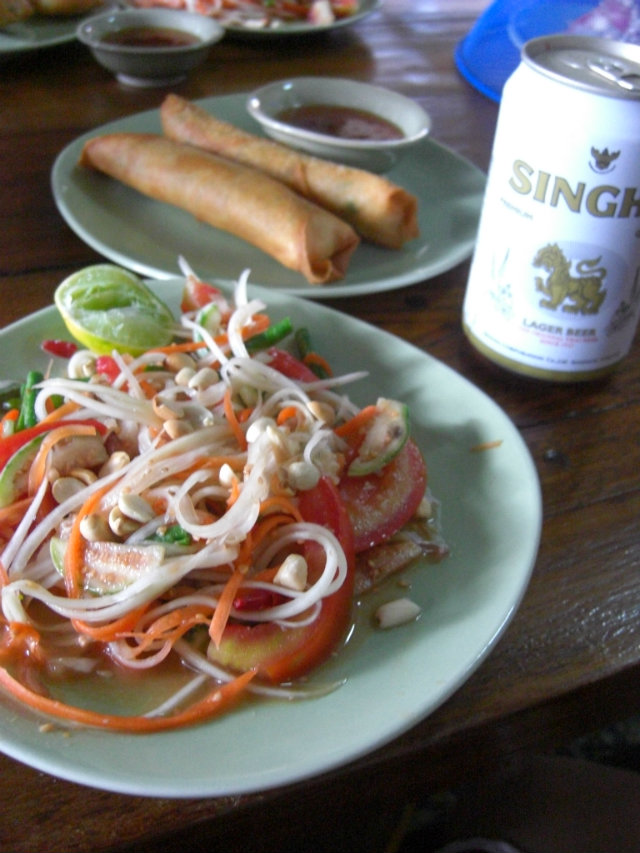 One of the most well known salads you’ll encounter in Thailand is called Som Tham (Green Papaya Salad). Often sold by street vendors, this tasty salad is originally a dish from neighboring Laos. The various components are tossed into a mortar and pestle fresh when you order them. Ingredients include crunchy strips of unripe papaya, garlic, palm sugar, fish sauce, green beans, tomatoes, lime juice, and as many chilies as you indicate. The original Lao version usually has salted field crabs in it, while the Thai version uses dried shrimps and sometimes peanuts. It’s popular to eat your green papaya salad with some sticky rice and a protein like fried chicken or fish. Laab is another popular salad from Laos, made of minced meat and seasoned with lime juice, herbs and chilies. 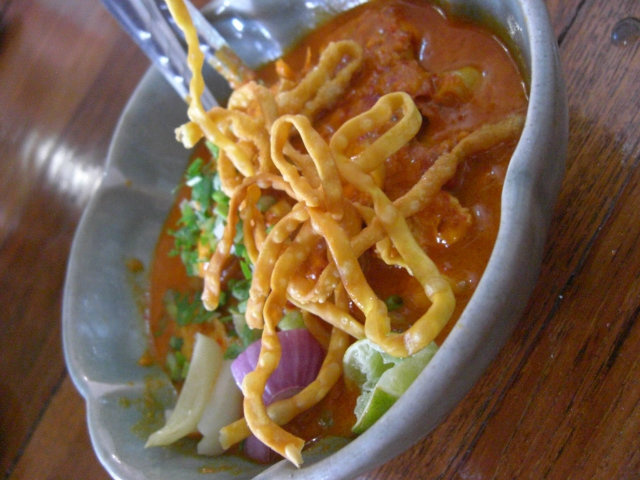 Foreigners often hail Pad Thai as the national dish of Thailand. Flat noodles with strips of egg, bean sprouts, dried shrimps, tofu are seasoned with lime and fish sauce. Condiments such as chilies in vinegar and crushed peanuts can be added to taste. Although this is the most popular of the noodle dishes, you should also try the stalls selling delicious noodle soups. Regional noodle dishes include Khao Soi, sometimes called Chiang Mai noodles, since they are a specialty of the town of Chiang Mai in northern Thailand. This noodle dish is served in a light coconut-curry flavored broth and a bit of fried egg noodles over top. It should be noted that noodles are considered Chinese, and therefore are the only Thai food eaten with chopsticks. 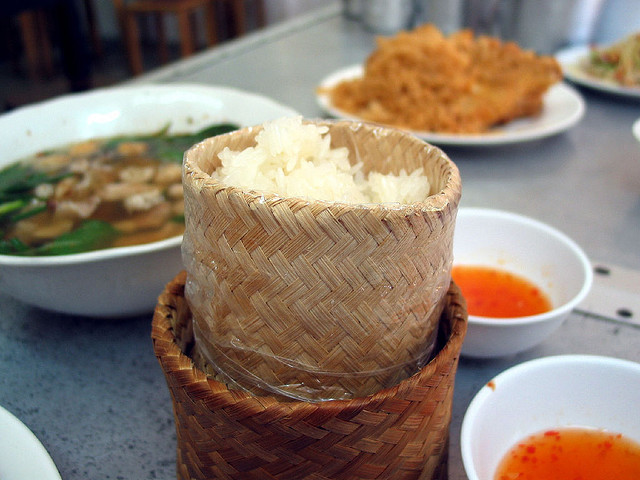 Rice is a staple in Thai cooking, and a popular type you will encounter is the gelatinous Khao Niaw (sticky rice) often rolled up and eaten with the hands or wrapped around bits of food, especially those from the northeaster regions of the country. Sticky rice can also be served as a dessert where it is steamed in coconut milk with mango. Jasmine rice is the other type of rice you will most likely encounter in Thailand, especially with curry dishes. Sometimes rice will be wrapped in banana leaf or even bamboo stalks and steamed, other times it will be stir fried or made into a porridge called Khao Tom, popular as a breakfast food. 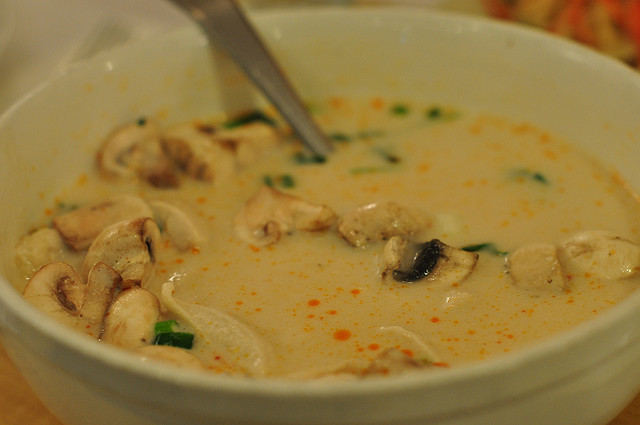 There are various types of curries in Thai cooking, most coconut-milk based with various levels of heat depending on the chili paste mixture used as flavoring. Gaeng Kiaw Wan (Green Curry) is delicious, but you may also want to try the slightly sweeter (often served with potato chunks) yellow curry or the classic red curry, made with dried chilies in the paste. Tom Kha is a chicken soup with a coconut milk base (similar to a watery curry) flavored with lemongrass, galangal, and kaffir lime. Tom Yum is a flavorful soup with a clear broth which can be made with shrimp or chicken and spiced up with chilies. 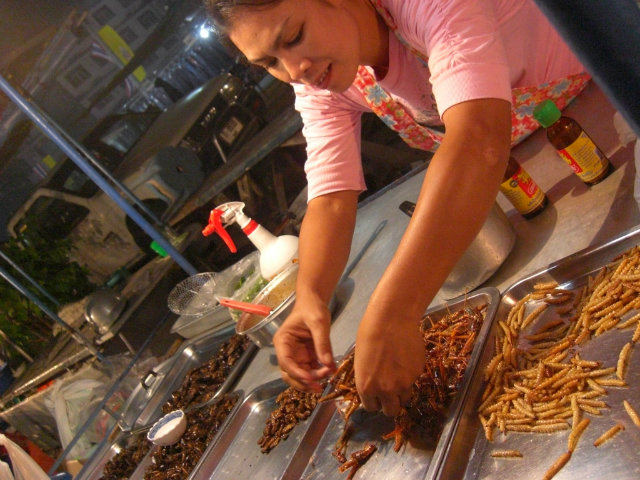 Snacks and desserts are both commonly bought from street food vendors. Some of the local snacks may seem strange or scary to foreigners – crickets and grasshoppers are often fried to a crisp, seasoned with salt, and then munched on like protein-rich versions of potato chips. Various types of food-on-a-stick are popular such as chicken, beef, pork, or seafood ball sticks, often grilled over a flame and served with dipping sauces. For a sweet treat, check out vendors selling coconut or rice based dishes, or special occasion treats like Foi Thong (“golden threads”) made from egg yolks and sugar.

photo credits: rice, curry – all others by Malia Yoshioka