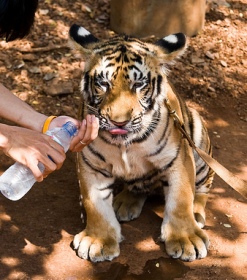 Few are the places in the world where you can touch a fully-grown tiger and one of the most popular of them is Tiger Temple.

Tiger temple was founded in 1994 as a sanctuary for wild animals. In 1999 the temple received the first tiger cub which has been found by villagers and was on the verge of dieing. Later several other cubs were given to the temple and all were orphans. According to the Thai government the story is a bit different as they believe people gave the tiger cubs to the temple in order to get rid of the “pets” under the pressure of laws.

As of 2007, over 21 tiger cubs have been born in the temple. There were 12 adult tigers and 4 tiger cubs at that time in the temple. Most of them are Indochinese Tigers and one is a Bengal Tiger. It’s also believed that there are newly discovered Malayan Tigers but most likely these are cross breeds.

The tigers live in cages and are fed cooked chicken and beef meat as well as dry cat food. The meat is cooked in order to avoid giving the tigers a taste of blood and also to kill the bird flu.

The adult tigers are handled and fed by Thai monks and the young tigers are cared for by volunteers.

The temple practices a different conservation philosophy than in the west. While in the west the emphasis is on providing the animals a natural environment, at the Tiger Temple –at least until the sanctuary is finished – they treat the tigers as family members. Without any breeding program in place, 10 cubs have been born at the temple.

The temple opens daily for visitors at around 1 PM. Until 4 PM the tigers are chained in the canyon near-by the cages. Initially they were allowed to roam freely but with the increased number of visitors, extra safety measures are taken. 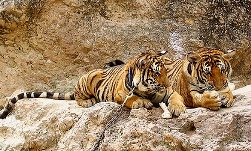 The most common way to visit the temple is to take a tour from near-by Kanchanaburi and pay only the entrance fee. You can also hire your own Songthaew from the bus station. Day trips from Bangkok are also available.

Note: if you want to take a photo with the tiger you are asked to leave a donation.

If you want to volunteer at the temple, you can find more information on the temple’s official web page (in English) . It’s important to know that all volunteers must adhere to the Buddhist lifestyle.