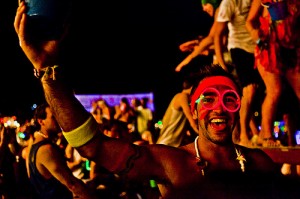 One of the biggest parties in the world and practically a rite of passage for young backpackers, Thailand’s Full Moon Party is a throbbing mass of DJs and dancers, decked out in day-glo, who gather every 28 days under a full moon. During high season, the party can attract tens of thousands of people, most of whom can be found gyrating on the beach long after the sun has come up the next morning.

If you’re considering catching a Full Moon Party, here is some info for you:

Where is the Full Moon Party held?

Thailand’s Full Moon Party is held on Ko Pha Ngan’s Had Rin beach. Ko Pha Ngan is just north of Ko Samui, and is a small, mountainous island popular with budget travelers. Had Rin is at the southern tip of Ko Pha Ngan.

How do you get to the Full Moon Party?

Because the Party is so popular, there will be no shortage of transportation options. If you’re not in the area already, your best bet is to take an overnight train or bus to Surat Thani, and then transfer to a ferry from there. Alternatively, you can catch a flight to Ko Samui from Bangkok, Phuket, Chiang Mai, and Trat (for Ko Chang) and then take a boat from there to Ko Pha Ngan. Don’t worry; it’s all set up for you.

More information on getting from Bangkok to Ko Samui

Where should I stay for the Full Moon Party?

During the build-up to the Full Moon Party, accommodation can book up more than a week in advance. If you’re planning on attending during high season (November to February), make sure you have a good idea of where you want to stay — and forget about arriving on Had Rin a couple of days before the Party and finding a room. Generally, the closer you are to the party, the further out you need to book your room. When I attended in December 2004, I arrived two weeks early. I booked a room, which I split with two other friends, and then we used Had Rin as a base to explore the rest of the island; we even spent a few nights on other beaches.

During the Full Moon Party, pretty much everyone in the vicinity is geared towards getting you to and from the celebration. That means that if you stay on another beach, you should have no problem finding a boat or car to take you there and back. Longtail boats even make the crossing from Ko Samui.

From sun down until way beyond sunrise, the beach is packed with bodies writhing to beats. Each bar tries to outdo the ones next do it, and walking along the beach is like walking through walls of sound. Party-goers carry buckets (actual plastic buckets filled with hard liquor and a mixer) from scene to scene, mingling and dancing. As the tide comes in, folks dance out in the water.

Well, it’s a lot safer if you keep your wits about you. Had Rin is home to a couple dozen clinics, and it’s a matter of supply and demand. You can’t have a few thousand drunk people in the one spot without having a few accidents. Wear shoes! The beach gets incredibly trashed during the party.

It’s best to keep your essentials – credit cards, passport — in your room, and keep your room key on your body, as in tied around your neck. Only carry as much cash as you need for the night.

Police crackdowns are commonplace. Vehicles coming into Had Rin from elsewhere on the island are usually searched, so you’d be wise to stay away from any illegal drugs. That goes for at the party, as well. Undercover cops selling drugs are also common, and drug laws in Thailand are extremely harsh.

With a bit of planning and a dose of common sense, you should have no problem enjoying one of the world’s biggest parties. But if the scene is a bit too much for you, consider attending one of the Half Moon Parties — these are often better than the Full Moon Party as the hype is toned down a bit and you can actually move around and enjoy the music. If even that is too much, don’t worry: Thailand’s Full Moon Party is so successful that beaches everywhere have begun throwing them, and on Had Rin you’ll even find a New Moon Party.