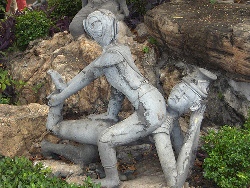 Originating over 2,500 years ago in India, it was later introduced to the Buddhist temples in Thailand. Many people say that receiving a Thai massage is like doing yoga without any work. Contrary to popular belief, Thai massage does not imply any erotic/sensual massage and is preformed fully clothed.

What is Thai massage?

Thai massage is an ancient form of massage practiced in Thailand and which is based on traditional Ayurvedic techniques influenced by traditional Chinese medicine. The purpose is to heal a person physically, emotionally and spiritually.

It’s believed that the Traditional Thai massage was introduced in Thailand by Shivago Komarpaj more than 2500 years ago. When Buddhism reached Thailand the temples did not only deliver the religion but also incorporated schools where education in medicinal techniques took place. Among other practices, massage was also taught here.

Wat Pho (located in Bangkok) is believed to be the birthplace of Thai massage. There is a Thai massage school still working on the grounds of the temple.

Thai massage is different than what westerners perceive as massage. It’s practiced fully clothed on a floor mat. Oils and lotions are not necessary.

Thai massage shouldn’t be done immediately after surgery, after chemotherapy or radiation, if there are any open wounds, if pregnant (check with your doctor) and if you are prone to blood cloths.

It’s recommended not to eat a heavy meal before the massage. Tell the therapist your medical history because people with certain conditions shouldn’t have Thai massage.

If you feel any discomfort let the therapist know.

A full Thai massage – typically taking two hours – costs 300-500 Baht (US$10-16) but it can cost even five times as much in a luxury resort. There are dozens of Thai massage parlors in every big city in Thailand.

Some of the Thai massage parlors include:

Can I learn to do Thai massage?

If you happen to be in Chiang Mai, you can take a 30 hours (5 days) course at the Thai Massage School (TMC). Similar schools operate in USA, Taiwan, Singapore, Japan, Switzerland and Germany. Classes are taught by graduated teachers from TMC.