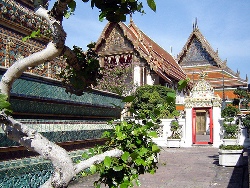 In Thai, Buddhist temples are called “wat” and there are over 31,000 wat in Thailand. There are two main categories of wat: temples that carry out religious functions and temples which are used only as living quarters for the monks.

Out of the 31,200 temples, 200 are Royal temples which were either built by Royalty or came under their sponsorship. The rest are Common temples.

Most important temples in Thailand

Located in Phra Nakhon district, Bangkok, Wat Pho is also known as The Temple of the Reclining Buddha. It stands close to the Grand Palace. The temple is known as the birthplace of Thai massage.

Wat Pho is the oldest and largest temple in Bangkok and is home to more than one thousand Buddha images. One of the largest of them is the Reclining Buddha, decorated with gold plating on his body. The Reclining Buddha is located in the northern walled compound. In the same area there is a Thai massage school. The southern walled compound is a working Buddhist monastery.

This temple located in Bangkok is located between the Grand Palace and the Front Palace (the residence of the vice-king) and is one of the 6 royal temples of the highest grade. In the past the temple was used for ceremonies and funerals. Thailand’s oldest higher education institute for Buddhist monks is located within the temple.

It is located in the Bangkok Yai district, on the west bank of the Chao Phraya River. The most important feature of the temple is the central prang. The corners are surrounded by 4 smaller prangs decorated with seashells.

Other temples in Thailand

Chiang Mai is home to several important temples, out of which Wat Phrathat Doi Suthep is the most popular. The temple overlooks the city from a mountain. According to the legend, the site was chosen by an elephant which was sent on the mountain side to roam. When it reached the spot it trumpeted and circled three times and kneeled down. If you climb the 300 steps leading to the temple, the entrance is free. Alternatively there’s a cable car going up to the temple (50 baht fare for tourists).

Wat Chiang Mun is the oldest temple built in Chiang Mai and is famous for two Buddha images it houses. One of them is a tiny crystal Buddha which is thought to have the power to bring rain.

Wat Phra Jao Mengrai is a wooden temples also located in Chiang Mai. It offers a quiet atmosphere away from the beaten track (and not overwhelmed with tourists).