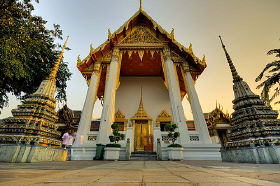 Easily one of the most popular tourist attractions in Bangkok is the temple complex known as Wat Pho – it’s not only the biggest and oldest in the city, it also houses one of Bangkok’s most famous inhabitants: The Reclining Buddha.

The official name of this temple is Wat Phrachetuphon Vimon Mangkararam Ratchaworamahawihan – thankfully, it’s commonly known as Wat Pho, both by visitors and by locals. It was established in the 16th century, but it wasn’t until the early 1800s that it was made open to the public as a place for learning. In fact, while the Reclining Buddha may be the star attraction in Wat Pho, this temple is also where traditional Thai massage – something the country is famous for – was born.

The Reclining Buddha, one of the largest images of the Buddha anywhere and certainly the largest reclining Buddha in Thailand, measures in at 150 feet (46 meters) long and 50 feet (15 meters) high. The statue is gilded from head to toe, although the soles of his feet are intricately inlaid with mother of pearl. The designs on the feet represent the 108 signs which identify someone who is enlightened. 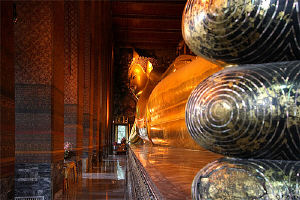 The room housing the Reclining Buddha is actually quite small, especially given the size of its masterpiece. It was purpose-built to house the statue, but because it’s snugly fit into its surroundings, that may make it difficult for you to fully appreciate just how large it really is.

Today, Wat Pho remains a center for learning, as the College of Traditional Medicine is still based on the temple grounds. You can sign up for short courses in Thai massage and other healing methods, and you can also take advantage of a whole bunch of massage students looking for people to try out their new skills on! If you’re willing to be a guinea pig for a masseuse-in-training, head for the eastern end of the temple grounds and look for the rows of benches. It’s not free, but it’s not expensive and the atmosphere is fantastic. 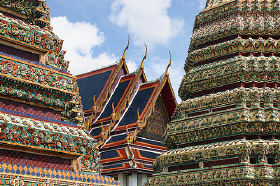 Lest you think the famous Reclining Buddha is the only Buddha at Wat Pho, allow me to point you to the gallery which features more than 400 Buddhas on display, as well as the bronze Buddha which sits on a high, gilded pedestal. The Buddhas aren’t the only things of beauty at Wat Pho – look up and be amazed by the pretty mosaic work on the towers and spires throughout the temple complex. And while you’re there, take some time to explore the rock gardens on the temple grounds. The rocks were once used to help people learn about geology.

»Learn more about Temples in Thailand