Real Beach Where the Movie “The Beach” was Filmed

If you’ve read the book or seen the movie “The Beach,” you’re familiar with author Alex Garland’s fictional creation of a Utopian society set on a gorgeous Thai beach. While the story maybe be fiction, the real beach where “The Beach” was filmed is real – sort of.

Most of the movie adaptation of “The Beach” was filmed on Thailand’s Maya Bay, an insanely picturesque spot with glass-clear water that is completely flat. Large, jungle-covered cliffs nearly surround the entire bay, which is located on Ko Phi Phi Leh on Thailand’s east coast (somewhat close to Krabi and Phuket). The reason is the beach is only “sort of ” real is because in the film, the cliffs were digitally altered to look as though they completely surround the bay. If you’ve read the book, you’ll remember that the fictional beach was secret because it couldn’t be viewed (or reached) from the open ocean; visitors had to swim a series of caves under the cliffs, or jump a waterfall inland. Maya Bay, however, is not completely encircled – not a problem in the digital age! 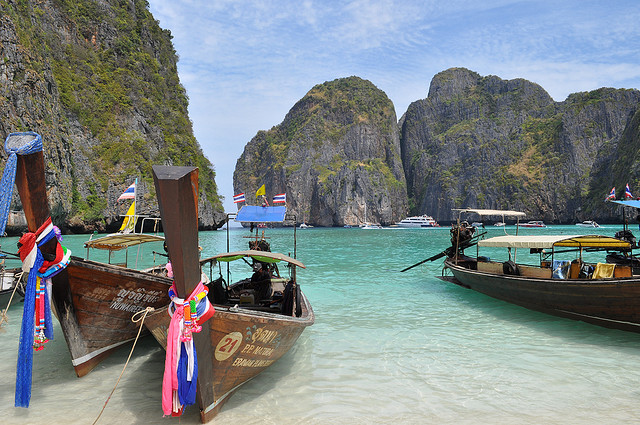 Though the “The Beach” location was  a major source of controversy due to changes to the environment for the set, today relative calm has descended to this tranquil spot. Parts of the beach were bulldozed, and  coconut trees were removed to expand the beach area itself, but evidence of these changes is difficult to find anymore. Today, it’s the crowds of day-trippers arriving in long-tail boats who threaten the bay’s peace.

To visit “The Beach” (Ko Phi Phi Leh Beach), first you need to get from Bangkok to Phuket (or Krabi). Ko Phi Phi Leh and Maya Beach are both wildly popular with tourists, who are eager to visit the utopian island they saw in the movie (however fictional it was). But  Ko Phi Phi Leh is so small that there’s no overnight accommodation, so if you want to visit Maya Bay you’ll need to make a day-trip. Don’t worry; there are plenty of day and half-day trips on offer from Ko Phi Phi Don, the larger of the two Phi Phi islands. Longtail boats are the most practical way to visit, but if you’re coming from Krabi or Phuket you’ll need to take a speedboat. There is no overnight accommodation on the bay, and if you want to camp you’ll need to bring your own food.

If you want to escape the crowds, take the earliest boat you can book;leaving at sunrise means you’ll likely share this idyllic beach with only a few other tourists. 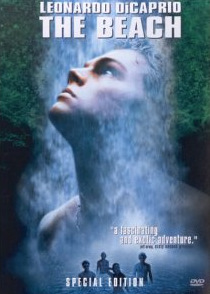 Published in 1996, The Beach is a novel, written by Alex Garland. The book follows an English traveler backpacking in Thailand.

When the movie of “The Beach” was first released, there were groups calling for people to boycott the film because of the damage they felt the movie had done to Maya Beach. For more about the controversy, see this interesting account of the various protests and legal action which revolved around the movie. This nice collection of Salon articles about the film and the book is also worth perusing, if you’re determined to find your own utopia.