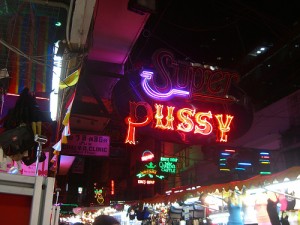 Patpong – the name is synonymous with sex and sleaze, yet there’s an undeniable draw to the Bangkok neighborhood. Below is a bit of history and information on the capital city’s red light district, but first, a caveat: Prostitution, though widespread, is illegal in Thailand. We don’t condone it, and we definitely don’t like it, but we also understand that it exists and will do our best to give you all the information you need to visit places like Patpong. Remember, however, that trafficking in children and women is a huge problem in Thailand, and that many of the prostitutes and performers you see are not there by choice.

Patpong is a neighborhood in Bangkok that is commonly referred to as the city’s Red Light District. Though prostitution is definitely a major business transaction in the area, it’s also famous for sex shows and a tourist-centric night market. Foreign tourists and expats are the main visitors to the area.

The area is comprised of two parallel side streets, or sois: Patpong I and Patpong II. They run between Silom and Surawongse Roads.

Patpong is named after the family who purchased land in the area in 1946. Though it feels very central, half a century ago the land was on the outskirts of the city. The Patpongpanit family purchased the undeveloped land, filled in one the canal that ran through it (the sad fate of many of Bangkok’s canals), and built a road and several shops. It became a popular spot in during the Vietnam War for US soldiers on R & R, and is considered to the birth place of Thailand’s Go-Go culture. The scene peaked during the 1970s and 1980s. Today, it is geared more toward entertainment than sex per se, with nightclubs, shopping, and live music, but all are centered around sex-related activities.

What do see and do in Patpong

Well, besides hire yourself a farmer’s daughter from Isaan, or getting a massage with a happy ending, you can also watch a sex show. You’ll see “ping pong” shows advertised; these involve women doing fairly amazing tricks with their genitalia: smoking a cigarette or shooting ping pong balls out to hit targets, for example. Strip shows and poles dances are also all on offer.

Warning: I’ve had one friend drugged in Patpong. He ordered a cola in a bar with no cover charge. He let without buying any of the girls a drink or spending any other money, and by the time he made it to the Skytrain, he realized something had been slipped in his drink. Be very, very careful!

There are a few gay bars in Patpong as well, filled mostly with ladyboys.
The night market has gained notoriety in the past years as one of Bangkok’s top markets, on par with Khao San Road’s and Sukhumvit’s night markets. It’s fairly touristy and more expensive than the others; however, if you’re in the market for pornographic DVDs, look no further.

How to get to Patpong

One final warning: Another common scam in Patpong is to have you buy a girl (or two or three girls) a drink. You won’t be told the price of the drink, and will only be handed the bill at the last minute. The price will be something crazy, like $10USD per drink. Don’t bother fighting it… you won’t win.