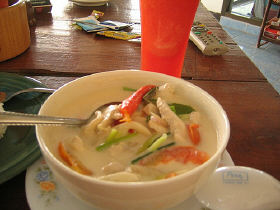 One of the eternal questions when you’re visiting a new place is, “Do I tip people here?” In some places, tipping is expected and you’ll be considered rude if you skip it. In others, tipping is actually considered rude! It’s an important thing to know before you head to a new country. So, what’s the policy on tipping in Thailand?

You’ll be pleased to know that tipping in Thailand, while not a rude gesture, also isn’t always expected. It’s nice to leave a few extra coins for someone if they’ve been particularly helpful or if a meal has been especially good, but you won’t need to worry about calculating a certain percentage of the bill in order to come up with a “respectable” tip. This is partly because with many tourist services there’s already a service charge or Value Added Tax (VAT) added onto the bill – this sometimes covers what you would ordinarily leave as a tip, so be sure to scan your bill to see if there’s a VAT or other charge automatically added before you consider your tip.

Restaurants
Restaurants that cater primarily to tourists will, for the most part, have a VAT and/or service charge added on to the bill – and some restaurants are notorious for trying to overcharge or otherwise rip off unsuspecting tourists by upping the usual percentages of these automatic charges. Some additional charges are perfectly acceptable, and even required by the government, but it’s good to know what the current VAT and service charge percentages are so you know if you’re being bilked.

Above and beyond these automatic charges, leaving a tip isn’t expected – but it’s also nice to leave a few coins if the service has been especially good or helpful. Also remember that in eateries which are frequented more by locals rather than tourists, they won’t be adding all of these extra charges onto your bill and it really is more polite to leave a few coins on the table. If you’re in doubt as to what kind of place you’re in, watch what other customers are doing first.

Taxis
Like with the restaurants, taxi drivers don’t usually expect a big tip – but rounding up and letting them “keep the change” is a nice gesture if your driver has been helpful.

Hotels
Hotels, like the more touristy restaurants, will already be adding a VAT and/or service charge to your bill (again, know what the current percentages are for both so you know if you’re being overcharged). But, like in most places, it’s also polite to leave a few coins in your hotel room when you check out as a thank-you to the cleaning staff.