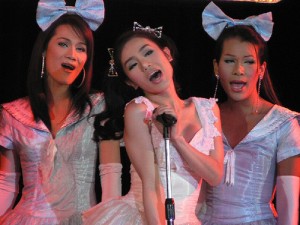 It’s an ongoing joke among younger male tourists in Thailand: that hot Thai woman you’re flirting with may not actually be a woman….

But all jokes aside, the “ladyboy” culture in Thailand is a vibrant, often celebratory scene, in which the country’s “third gender” is free to be (or at least dress) just how they want. Unlike in the US, where cross-dressing and gender bending are often underground and alternative, Thailand’s scene appears to be much more open. I’ve seen young boys dressed in evening gowns performing at cultural events, a very responsible-looking pharmacist with a giant Adam’s apple and a conservative pink cardigan paired with skinny jeans, and ladyboys decked out in boas, vinyl miniskirts and stiletto heels. Though the former image is the most visible for tourists to Thailand, vamping up is by no means the only way that ladyboys express themselves.

First of all, what exactly is a ladyboy?

The Thai word for ladyboy is kathoey (“kuh-too-ee”), which has no direct translation in English. Rather than refer to someone male with female characteristics, or the opposite, the word instead implies a third gender. A kathoey can be a male that dresses as a woman, a female who has undergone surgery and treatment to change male parts to female ones, or an effeminate gay male.

Contrary to popular belief (thanks to the prostitution industry), not all ladyboys are glammed up and sporting tube dresses. The sad truth is that often the sex industry is the only outlet for ladyboys to make a living, and is the most visible type of life to tourists. With prostitution come all of its problems, namely STDs and AIDS.

Buddhist Thais believe that being a ladyboy is a result of transgressions in a former life, and that they should be pitied for their poor fortunes. Therefore, it’s often difficult for ladyboys to find mainstream work. If you look hard, however, you will spot ladyboys performing everyday jobs; there was my pharmacist, for example, and I’ve also met a taxi driver ladyboy.

Note that ladyboys consider themselves female, and use the female word “kaa” when speaking.