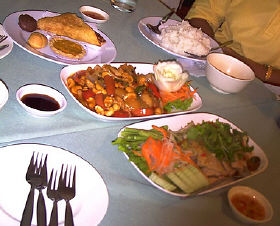 While most of the people you’ll run into in the most touristy areas of Thailand – especially the younger generations – will speak at least a little English, if you should get a little off the beaten trail you could be facing a Thai menu with no one around to translate for you. With that in mind, we thought we’d present a few Thailand menu tips here. Of course, with Thai being a tonal language, and with several methods for writing Thai using the Latin alphabet, this will only be a starting point for you. Your best bet is probably to bring along a good phrasebook that includes a menu guide, or to bring someone who speaks Thai!

Common Food Phrases
May I look at the menu? = kho duu menuu krhap? (for men); kho duu menuu kha? (for women)
Delicious. = arroi.
How much is this? = nee taorai?
The check, please. = keb ngern duai.