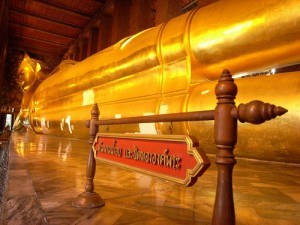 Buddhist temples sit placidly amongst Bangkok’s frenzied streets, calm reminders of the country’s major religion. A stop into a smaller one or a tour of a large famous one are both lovely aspects of a visit to Bangkok. Following is a description of five of the more well-known Bangkok temples (the government tourist website lists 14 major temples) but don’t limit yourself to this list; pop into quiet neighborhood temples to see Thais performing their everyday-life rituals.

Wat Phra Kaew
The “Temple of the Emerald Buddha” is Bangkok’s most-visited temple. The large complex also holds the Grand Palace, the former residence of the Thai monarchy. One of the most important temples in Thailand, Wat Phra Kaew features a Buddha carved from a single piece of jade. The image is so revered that only the King or crown prince is allowed near it — three times a year, they change the statues royal garments.

The 94.5-hectare grounds are Bangkok’s number one tourist attraction, as well as an important pilgrimage site for devout Buddhists. As such, you can expect crowds; try visiting right around opening hours (the temple is open from 8:30am to 3:30pm and admission is 125baht).

Wat Pho
Home of the reclining Buddha, this oft-photographed temple features a 46-meter-long Buddha covered in gold leaf. It sits right behind Wat Phra Kaew, and although visited less frequently than it’s jade-carved neighbor, is quite a bit more stunning. The massive Buddha features mother-of-pearl inlay on the feet – which are three meters long! – depicting 108 characteristics of the Buddha (“lakskanas”).

Wat Arun
Graceful spires dominate the skyline at Wat Arun, which sits on the western bank of the Chao Phraya river. It’s name means “Temple of the Dawn,” though it tends to be most beautiful when the setting sun lights it up. Wat Arun was the original home of the Emerald Buddha, but when that statue was moved, the temple received its signature “prang” (a Khmer-style tower). A soothing entrance garden greets you, while inside the temple you’ll find a Buddha image that is rumored to have carved by King Rama II himself. Rama II’s ashes are sit at the base of the Buddha.

Visit Wat Arum between 9am and 5pm, and bring 20baht for admission.

Wat Suthat
The funnest part about this temple? It has a giant swing! The headquarters for Brahman priests, Wat Suthat is the site for the Royal Plowing Ceremony, held every year in May. Inside the complex is the Royal Temple, home to

The Sao Ching-Cha, or Giant Swing, once hosted a Brahman festival in honor of Shiva, during which participants would swing as high as they could, attempting to reach a sack of gold tied to a 15-meter bamboo pole. Maybe people died trying, and the festival was discontinued. The swing you see now was implemented in 2006, and is made of six specially-chosen teak logs.

Wat Benchamabophit
This temple is depicted on the back of the five-baht coin. Wat Ben, as it’s known, is made of white Carrara marble and features perfected symmetry and proportions. The “Monastery of Five Kings” was designed by a son of King Rama IV, Prince Naris, and was completed during the reign of Rama V in the late nineteenth century. Ornate bridges cross canals on the left and front sides of the temple.

Come early to see locals giving alms to the monks; this is the only time of day you’ll see them as these monks stay inside.

Wat Benchamabophit is open from 6am to 6pm. Admission is 20baht.