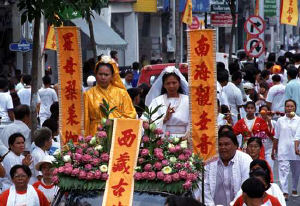 Every year in the popular Thailand tourist destination of Phuket there’s a festival called the Phuket Vegetarian Festival. It’s a Chinese festival, timed with the 9th lunar month on the Chinese calendar (usually the end of September or early October), and as you might expect it does involve observing a strict vegetarian or vegan diet for the duration of the festival. But the Phuket Vegetarian Festival is much more famous for something other than the diet of the locals.

In fact, the most famous aspects of this Puket festival are the acts of self-mutilation which religious devotees inflict upon themselves – from walking barefoot over hot coals to piercing their cheeks with sharp objects. These acts, along with the strict diet, are meant to cleanse the body and spirit with the help of local religious leaders, called mediums. The traditions are Taoist rather than Buddhist (which is the religion of the vast majority of the Thai people), and the festival itself dates back to the early 1820s.

There are 10 rules that must be observed by participants in the Phuket Vegetarian Festival, including the wearing of white, the use of separate utensils from people who aren’t participating in the festival, the prohibition of pregnant or menstruating women from watching or attending any rituals, and the prohibition of drinking alcohol and having sex.

While in recent years, the sometimes gory spectacle of the Phuket Vegetarian Festival has become a major tourist attraction for the island, its history suggests that locals would continue to perform the same rituals and observe the same religious rules whether any outsiders came to town or not.

And if you’re wondering why there aren’t any photos of the cheek-piercing here, let’s just say that not everyone loves looking at that kind of thing. If you’re curious, a simple image search for “Phuket Vegetarian Festival” will bring you more than you could have ever hoped to see of self-mutilation. Trust me.

Here’s a video showing some aspects of the Phuket festival: