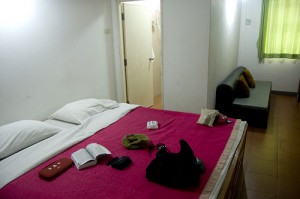 As the budget accommodation center of Bangkok, Khao San Road appeals to those who are watching their wallets. Plenty of cheap guesthouses are on offer, both on KSR and within a one-kilometer radius of this backpacker hub. With prices for private rooms being comparable to dorm beds, remember that hostels are a great place to meet other travelers. If you’re journeying solo, staying in a hostel is a great way to meet travel companions.

Often budget hotels will bill themselves as “hostels,” but they won’t necessarily have dorm rooms. Instead, they’ll rent out singles, doubles, triples, and quadruples. The larger rooms are beneficial to those traveling  in groups, and can be a great value – especially if you don’t need a private bathroom. You can expect to pay a rock bottom rate of 100 baht ($3.50 US) per person for a very basic shared room with a bathroom down the hall.

Actual hostels with dormitories are fairly rare in the Khao San Road area, likely because private rooms are so cheap. That being said, a few “boutique” hostels have opened in Bangkok recently, and dorm beds in these are significantly more expensive than in old budget guesthouses. However, you can expect comfortable beds, clean rooms and bathrooms, and amenities such as an on-site travel agent, free wifi, and complimentary breakfast.

If you’re flying into Bangkok during high season or at an odd hour, it’s worth it to book your first couple of nights ahead of time. Nothing is worse than wandering the crowds at 1am with a backpack sticking to your sweaty back, trying to find a bed.

Here are a few options for you to check out:

The area’s newest hostel is probably its nicest, with a sleek and modern design. It’s a bit  expensive compared to other accommodation on Khao San Road (a bed in a mixed-sex dorm will cost you around $13USD), but it’s worth it. Amenities include 24-hour hot water, a cafe, a library, games and DVDs, and a special “nap” lobby. It’s located about two blocks north of KSR.

Just 20 meters from all the Khao San Road action, this party place offers dorm beds in an air-conditioned for around $5.  Renovations were completed in November 2010, and the new digs are spic and span. A sociable place, it’s a fabulous place to meet other budget travelers. The on-site bar doesn’t hurt, either. Linens are provided, though a towel will cost you extra.