Getting from Bangkok to Phuket 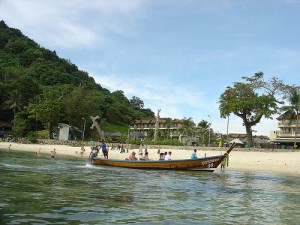 Phuket is one of Thailand’s most popular destinations as well as a hub for travel in the south of the country. Located on the south-west coast in the Andaman Sea, Phuket is Thailand’s largest island and also home to an international airport.

Because of its popularity as well as its position as a small international hub, Phuket is fairly easy to reach from Bangkok. You have several transport options, outlined below.

Getting from Bangkok to Phuket by air

Catching a flight is the easiest way to reach Phuket from Bangkok. The flight is short — around just over an hour — and fairly inexpensive. Airlines that fly from Bangkok to Phuket include Thai AirAsia and Thai Airways, both of which fly out of Bangkok’s Suvarnabhumi Airport (that makes it easier if you’re flying in to Bangkok from somewhere else). One-Two-Go and Nok Air fly from Bangkok’s Don Muang Airport.

The Phuket International Airport is located 30 kilometers from Phuket Town, to which you can take a minivan and then transfer to transportation headed for the beaches.

Getting from Bangkok to Phuket by bus

A true budget option, the bus is a simple overnight ride from Bangkok. The journey takes about 13 hours, so you’ll save on a night’s accommodation. Buses depart frequently from Bangkok’s Southern Bus Terminal; on all but the busiest holidays you can show up and expect to find a seat. We always recommend the first-class, VIP buses – while they’re the most expensive, they’re the most comfortable, which is key in surviving an all-night ride.

Buses from Bangkok’s Southern Bus Terminal arrive at Phuket Town’s bus terminal. From here you can catch transport on to the beaches.

Tip: We recommend always avoiding the buses that are booked from Khao San Road. They may seem cheap and convenient, saving you a trip out to the Southern Bus Terminal, but there is usually a price to pay. Many travelers complain not only of theft on the overnight rides, but also of “unplanned” transfers to rickety and cramped minibuses in Surat Thani.

Getting from Bangkok to Phuket by train

There is no direct rail line to Phuket, so travelers must transfer to a bus in Surat Thani. Despite this extra step, the train is a comfortable and fairly pleasant place to spend an all-night ride. It’s more comfortable than the bus, though it will take you a bit longer and cost more. Expect to pay around 750 baht ($25USD) for a second-class sleeper.