Getting from Bangkok to Hanoi 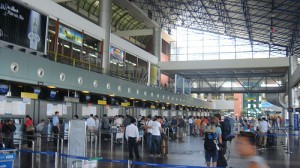 Bangkok is the capital of Thailand and also a major transportation hub in Asia. It is one of the best places to start exploring Asia, not only because there less cultural shock when you arrive here but also because it offers easy and cheap connections to all the other Asian countries.

Hanoi is Vietnam’s capital , offering an interesting mix of Chinese and French influences.

Flying is definitely the cheapest option and the fastest one for those only here on limited time. Book your ticket via Thai AirAsia’s website to get the best rates. But if you are on traveling to Hanoi on a round the world trip, want to see the scenery, and don’t mind the time it takes, you can choose a combination of trains and buses. Just be aware that you’ll be spending quite a lot of time on the road.

Flights between the two capitals are operated by Qatar Airways, Thai AirAsia , Thai Airways International and Vietnam Airlines. On large booking engines (i.e. Kayak), single adult fares start at US$94 on Thai AirAsia. Return fares start at US$202. The flight time is 1h 50 min (one way). On the other hand, if you book directly on the airline’s site, a single adult ticket starts at 1,890.00 THB (about US$63).

Trains from Bangkok to Hanoi

It’s not possible to travel by train between the two capitals. The reason? There are no trains connecting Vietnam to Laos or Cambodia (which are the countries that separate Thailand and Vietnam).

Trains and buses from Bangkok to Hanoi

Driving from Bangkok to Hanoi

Renting a car in Thailand and then driving all the way to Hanoi can be an interesting adventure. However, do keep in mind that you’ll be driving through Laos as well, so make sure to ask the rental company whether this is permitted.

The driving distance between the two capitals is 1411 km which can be tackled in about 22 hours. Do plan to stop driving during the night. Remember that you’ll be driving on toll roads, as well.