Getting from Bangkok to Chiang Mai 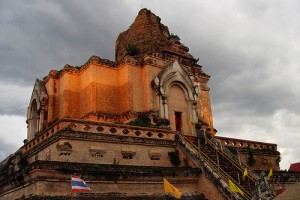 Chiang Mai is a popular destination in Thailand, and a great jumping-off point for exploring other towns in northern Thailand. Getting from Bangkok to Chiang Mai is a relatively inexpensive and painless journey, with options for every budget and time frame, since the northern capital is well-connected by air, rail, and road.

How to get from Bangkok to Chiang Mai:

Flying from Bangkok to Chiang Mai:

Flying to Chiang Mai from Bangkok is painless, with budget airlines such as AirAsia servicing the route several times a day. You can research cheap flights to Chiang Mai with our flight booking widget below, which will help you to find the best price and time for you. The flight from Bangkok to Chiang Mai only lasts about two hours. Most flights take off from Bangkok’s Suvarmabami airport, though smaller carriers such as Nok Air fly out of Don Muang. Be sure to check which airport you’re departing from so you can plan your transport there.

Tip: Though flights certainly book up, often you can wait until a week or so before you plan to travel to book your flight. Excellent service as well as plenty of competition between airlines usually means that seats are available and prices stay low. During holidays and peak season, however, you’ll need to book as far in advance as possible.

Train from Bangkok to Chiang Mai:

About half a dozen trains depart Bangkok’s Hualamphong station in the afternoon and evening bound for Chiang Mai. The journey lasts about 12-14 hours, though you can catch a Sprinter in the morning in Bangkok and be in Chiang Mai in 11 hours.

Tip: Trains from Bangkok to Chiang Mai (and the reverse) must be booked at least two weeks ahead during the peak season and holidays such as Chinese New Year. During the regular high season, you should book at least a week ahead.

Bus from Bangkok to Chiang Mai:

A true budget option, the bus from Bangkok to Chiang Mai is actually faster than the train (though not as comfy) as well as affordable.. All classes of buses are available, leaving hourly from 7am to 10pm. We highly recommend spending the extra one or two hundred baht to take a VIP bus, especially if you’re traveling overnight. The extra leg room, snacks, pillow, blanket, and service make it worthwhile. That ride should cost around 550 baht.
Regular 1st class buses are also fine for all-night travel. A ride on one of these will cost around 350-450 baht.

Except for busy holidays, you generally don’t need to book ahead – just show up at the bus station a couple of hours before you know you want to leave and book your ticket then.

Warning: Don’t book buses traveling to and from Khao San Road. We constantly hear first-person stories of travelers whose bags have been rifled through (at the least). Remember that your bag is in a large space underneath the bus, perfect for someone to sit down on an all-nighter and go through your stuff. Additionally, stories about of VIP tickets purchased, but rickety buses delivered. Always book through the bus station or one of the companies who run from the bus station.
&#187 Learn more about bus travel in Thailand