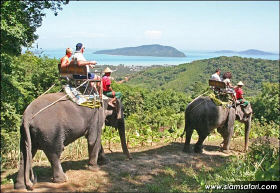 One of the most popular things to do in Thailand is to go on an elephant safari – and it makes sense, as the elephant is the national symbol, that there would be lots of elephant safaris in Thailand to choose from. So with all that choice, the things you’ll want to keep in mind are location, itinerary, cost, and how well the elephants themselves are being treated.

In the past, elephants in Thailand were used primarily for logging – and while some elephants are still used in this way, even more have been turned into a tourist attraction. There are elephant safaris in several areas of Thailand, although most elephant treks are concentrated around Chiang Mai, Khao Sok National Park and on the island of Phuket. Each of these locations has something unique to see, so read about each destination before deciding where you want to take your elephant safari.

Elephant safaris can vary in length from short excursions of one day to trips of up to four days or more. Which you choose depends on both the location you’re in and the tour company you decide to go with. Many tour companies combine several activities into one four-day trip, including white-water rafting, jungle trekking, checking out local craft-making, visiting villages & holy sites… Oh, and of course that all-important elephant ride!

Like the duration of these elephant treks, the cost will also vary. In most cases, the cost varies most widely due to the length of the trip, but in some cases you’ll see a really low price listed because things like transportation and lodging aren’t included, so you’ll need to be sure you’re reading the fine print about tour deals before you book. You can book a short excursion of a few hours to a day for well under $100 per person (some of which include multiple activities), or you can spend $300 or more for a multi-day trek. Most elephant safaris in Thailand are going to be much less expensive than you might think, which is one of the reasons they’re so popular – even with budget travelers.

Before you book any elephant trek, however, you should stop to consider the treatment of the animals themselves. There are some tour companies which are less reputable and which overwork and mistreat the elephants – and if you book your trip with them, you are inadvertently supporting that. In order to avoid supporting such mistreatment, be sure to book with a reputable company, many of which actually use some of their profits to help sick elephants. One of the companies that has been running elephant safaris for years and that is run ethically is Siam Safari. You can check out their website for more information on their tours.