Bridge Over the River Kwai: Day Trip from Bangkok 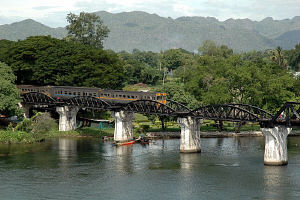 In many ways, the city of Bangkok can be an assault on the senses – and I mean that in both a good and bad way! It’s crowded and busy, and the pollution and heat can be overwhelming. And even when you’ve managed to find peace in the amazing temples or deals in the chaotic markets, there comes a time when you just want to get out of the city and take a day trip somewhere else. One of the most popular day trips from Bangkok is to visit the Death Railway and the famous bridge over the River Kwai.

Now, even if you didn’t know the story behind this historic attraction, you’d be able to tell just by the name that this is no amusement park we’re talking about here. The railway which is commonly known as the Death Railway is more officially known as either the Burma Railway or the Thailand-Burma Railway, and it gets its morbid nickname from the fact that so many thousands of people died in its construction. The numbers are shocking – more than 100,000 people died building the railway, or nearly one-third of the workforce.

Of course, it’s partly because of this gruesome history that it’s such an important World War II monument and such a popular tourist attraction. While the Death Railway itself was only in operation in its more than 250-mile entirety for two years, although today a 47-mile stretch still sees regular train traffic today.

Easily the most visited section of the Death Railway is the famous bridge over the River Kwai, popularized by a novel and later an Oscar-award winning film. The iron bridge you can visit today is actually the second to span the river; the first was made of wood and lasted less than six months. The bridge was known simply as “Bridge 277,” and while the Allied forces tried to destroy the bridge several times, it wasn’t until mid-1945 that they finally managed to render the bridge over the River Kwai in operable.

After the war, the pieces necessary to repair the bridge on the River Kwai were donated to Thailand by the Japanese, and today visitors can either traverse the famous bridge on foot or via a little tourist train which runs a 15-minute round-trip across the bridge and back.

While you’re out visiting the bridge over the River Kwai, be sure to also check out the nearby War Museum, which contains pieces from the original iron bridge which was destroyed by the Allies.

How to Get There

The bridge over the River Kwai and the most visited part of the Death Railway is in Kanchanaburi, and it can take between 2-3 hours to reach from Bangkok, depending on the method of transportation you choose.

By Bus: Buses leave Bangkok Southern Bus Terminal daily every 15 minutes from 4:00am until 8:00pm and the trip takes 2-3 hours. These buses are not air-conditioned, so be prepared. Tickets on these cost about

Air-conditioned buses also depart from the Southern Bus Terminal daily every 25 minutes; these are the blue buses.

By Car: Kanchanaburi is about a 3-hour drive from Bangkok along Highway 338 to Nakhon Chaisi Province and then Highway 4 to Kanchanaburi.

By Train: Trains depart the Thon Buri Railway Station in Bangkok a couple of times daily, and the journey is about 2&frac12;-3. All seats are in 3rd class, so don’t try to find a 1st class ticket! Also note that you can book a ticket which goes all the way to the bridge over the River Kwai – this is one of the only trains that is allowed to cross it. 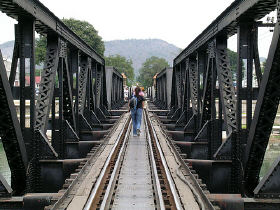 Once you’re in Kanchanaburi, you can walk across the bridge over the River Kwai for free – the center is a walkway for tourists, and there are platforms you can stand on off to the side in order to get a good view while still avoiding getting hit by the trains! For the ultimate experience, however, buy a 20 baht ticket for the 15-minute train trip across the bridge and back.

The War Museum is a short distance from the River Kwai bridge, and is well worth a visit. It’s 40 baht to visit the whole museum complex, and the museums are open from 7:00am until 6:30pm.