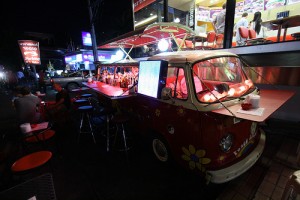 “One night in Bangkok and the world’s your oyster
The bars are temples but the pearls ain’t free….”

These lyrics, sung by Murray’s Head in the mid-1980s, hint of a seedy underworld in a seething Bangkok. The reality is that, almost thirty years later, Bangkok is not the den of drugs and sex that it was during and after the Vietnam War. Most bars and clubs stay open only until 1am, the prostitution industry, while thriving, is slowly sharing more and more space with the sex entertainment industry, and strict drug laws keep many foreigners from dabbling in anything but booze.

That’s not to say that the nightlife in Bangkok isn’t vibrant – in fact, it’s the opposite. Colorful night markets, excellent street cuisine, and fun bars with live music are all on offer. Here’s a rundown of some of your Bangkok nightlife options:

More on Patpong here.
More on shopping in Bangkok here.

Eating
Dining in Bangkok is so varied and vibrant that we wrote an entire post on it here. Think seafood from a swanky teak restaurant overlooking the Chao Phraya river, food markets filled with hissing woks, or noodles in Chinatown. Food from all over Thailand, and Asia, is available in Bangkok; it’s a fabulous city to dine in.

Clubbing and bar-hopping
If you’re looking for rowdy time, you can definitely find that in Bangkok. Start out at a swanky rooftop bar, such as Sky Bar, and then catch a cab over to a nightclub like Bed Supperclub or Q Bar, where you’ll find bottle service and all the pretty people.

Plenty more is available for nighttime fun in Thailand’s capital: the city is gay-friendly, and you’ll find plenty of bars catering to both gay and transgender party-goers. The city is easy to get around; even after the Skytrain and Metro has stopped, plenty of taxis and tuk-tuks hover, waiting to take you back to your hotel.

Have fun, be safe, and tell us what you find!