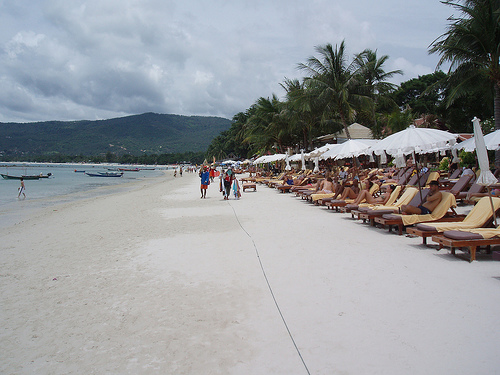 Thailand in August is almost a perfect storm of heat and humidity, in that the hottest summer months are behind you but the rainy season is just getting started – so don’t be surprised to experience humidity that almost never goes below 50% and can jump up to (and hover at) 90% just as easily. The average high temperature in August is around 90F (32C), which may not sound like much, but when you factor in the thickness of the air when it’s so humid you’ll likely change your mind.

August in Thailand is pretty slow on the festival front, with only the annual celebration of the Queen’s birthday on August 12 being a national holiday. (Incidentally, the Queen’s birthday is also when Thailand celebrates Mother’s Day, too.) There are a few regional or city-wide events, but these are mainly trade fairs or sporting events and not necessarily big festivals which might be of interest to tourists.

The less-than-ideal weather in Thailand in August and the lack of any internationally famous festivals does have its tourism advantages, however – it means that you will be more likely to find great deals at discount hotels in the country’s more popular destinations, and everything tourist-related is likely to cost you a bit less than if you visited during the busiest season. Luxury hotels and resorts often slash their prices and offer as much as 70% discounts on room during the tourist off-season. See? There’s always a way to look on the bright side!